The history of the Don Fishing Company and its subsidiaries

The Don Fishing Company was incorporated on the 28th November 1902, and has traded under that name ever since, making it one of Scotland’s oldest fishing companies. The core of the company’s business has always been that of Fish Selling as the Don has a proud heritage of auctioning fish throughout Scotland over its 100 years history.

The Don Fishing Company is part of JW Holdings which forms it roots from the 19th century fishing industry. The Woods family business began in the 1890’s when the family owned a number of fishing vessels operating out of the port of Aberdeen. In 1912, William Wood (Grandfather of Sir Ian Wood) founded Wood and Davidson, a ship repairing and marine engineering firm to service the fishing fleet. 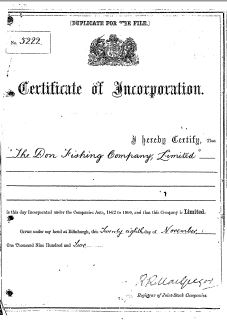 John Wood (Sir Ian’ Father), took over the family’s share in the early 1950’s before Sir Ian joined the company in 1964. By this time, the company had been renamed John Wood & Son, and the marine base was expanded into fishing, fish processing and general marine engineering. Sir Ian became managing director in 1967 and under his leadership the company switched from the larger deep sea trawlers to more profitable inshore boats. During this time, the company was the largest independent Trawler Owners in Scotland.

In 1981, it was decided to split the oil service business away from the family’s fishing business and on the 4th January 1982, two independent businesses were set up – John Wood Group focusing on engineering, oilfield logistics and drilling services, and JW Holdings. At the time in 1982, JW Holdings was the largest fishing company in Scotland. This company was made up of a number of subsidiary trading companies with some still surviving today.

During the 1990’s and early 2000’s the fishing industry started to decline as stocks decreased and restrictive external legislation was introduced. Many vessels were decommissioned and those that survived faced hardships for a number of years until key stocks started to improve. In order to protect stocks the Cod Recovery Plan was introduced which resulted in reduced fishing effort, more selective fishing, quota cuts and the introduction of Marine Protected Area’s.

The sacrifices made by fishermen in recent years have helped the Scottish Fishing Industry recover and optimism has returned to the sector. Key North Sea Stocks (Cod, Saithe, Haddock) have achieved MSC accreditation which shows that these stocks are sustainable and fully-traceable. The value of fish has increased and the catching sector including the Don Fishing Co are now investing for the future by building new vessels.

Throughout its 100 year old history, the Don Fishing Company have been Scotland’s premier fish sales business and a leader in its profession. The Don will continue to be at the forefront of the Scottish Fishing Industry. 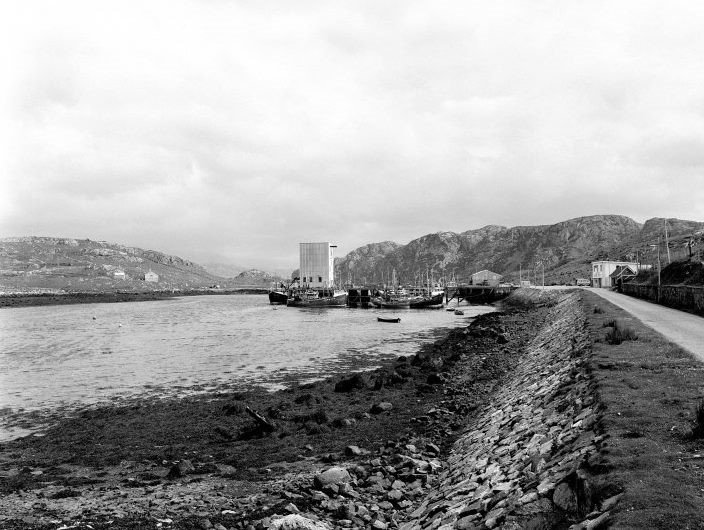 In the early 1900’s Kinlochbervie and its surrounding crofting townships were supplied by a steamship landing at Loch Clash pier. This pier and its proximity to rich fishing grounds allowed the development of a fishing industry that has become central to the economy of the area. Fishing grounds in North East Scotland were becoming less productive so skippers headed west to seek their fortunes. Kinlochbervie took full advantage of this new opportunity and businesses were set up to buy, sell and transport fish and to supply the vessels.

Pulford Scotland Ltd an off shoot of the Westminster Estates the major local landowners ran the Fishselling operations. This was subsequently taken over in the early 1970s by John Wood Ltd under the Directorship of (now) Sir Ian Wood trading as Kinlochbervie Fishselling Co Ltd and working closely with another of the Wood family companies The Don Fishing Co Ltd then based mainly in Aberdeen. 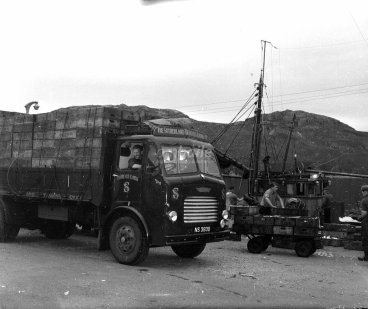 With the development of a new fish market in the 1970s the location of the landing area moved away from the “Old Pier” at Loch Clash and into the Loch Bervie basin where operations continue today. Over the 1970’s and 1980’s, Kinlochbervie continued to be an important port due to its strategic location to the North West Fishing Grounds. In its prime 3000 boxes of whitefish were landed on a daily basis.

While the ownership of Kinlochbervie Fishselling Co has changed over the years it has always focused on servicing the needs of the fishing fleet that operated out of Kinlochbervie. Now as a trading branch of The Don Fishing Co Ltd Kinlochbervie Fishselling has continued to offer its core services of operating fish auctions, vessel management, chandlery, boxes, fuel, ice and refrigerated transport to support the fishing industry in the Sutherland area. As the fishing fleet modernised over the years, the service provision on offer at Kinlochbervie adapted to suit the continual advancements of the industry. In the 1980’s a new modern ice plant facility was built to offer flake ice to vessels to allow the catch to be stored in optimum conditions. Our trucks specialise in refrigerated transport to ensure that the quality of the fish is preserved whilst being transported to merchants across Scotland and the UK. 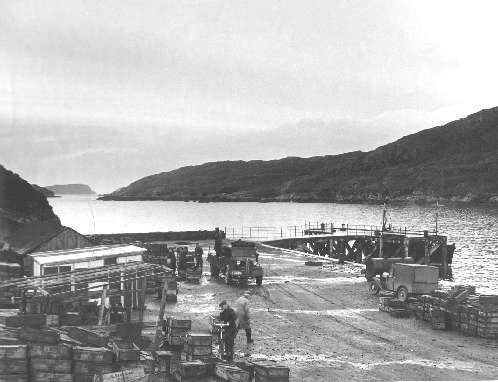 As the fishing industry declined in the 1990’s and early 2000’s due to external pressures and the Common Fisheries Policy, the amount of vessels operating out of KLB also steadily decreased. However whilst the older and smaller vessels left the fleet they were replaced by more modern deep water trawlers that use the port due to its close proximity to the prolific fishing grounds at Rockall, Faroe and North Atlantic.

A new fish market was built in the 1980’s and will be refrigerated by mid 2018. The upgraded market will provide vessels with flexibility as fish will be able to be landed at all times through the week with the reassurance that the fish quality will be maintained prior to being sold. 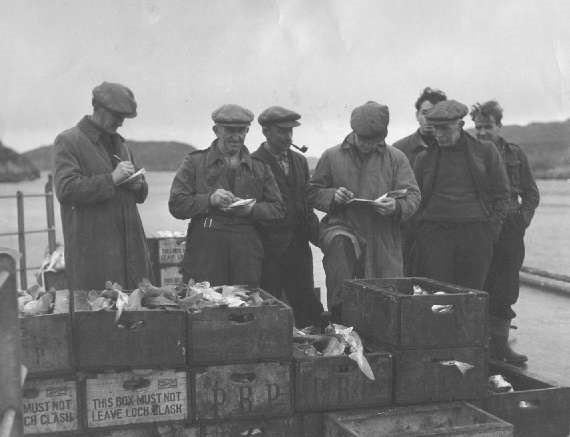 A number of new builds have been delivered in recent years as the Don Fishing continues its fleet modernisation programme. In 2017, both the Sparkling Star UL290 and Venture III were launched both using Kinlochbervie as their “Home” port.

John S Duncan, which would eventually become a trading subsidiary of the Don Fishing Company was first incorporated in 1960 as a fish selling and vessel management company in Wick.

The town of Wick enjoyed its greatest prosperity during the 1800’s where it become Europe’s busiest herring port. The town thrived during the seasonal herring fishery where in 1900 there was a fleet of 1120 herring drifters and the population of the town boomed. From a fishermen’s point of view fishing was profitable during the early years of the 20th century until the First World War destroyed the continental markets for cured herring. Most vessels were inscribed into the war effort which meant that after World War II many vessels were in a derelict state. In the late 40’s and 50’s, the fishing fleet was modernised with purpose built boats and new methods of fishing introduced. Gill nets were abandoned in favour of trawl nets/ring nets which lead to an overfishing of the herring stock and a total ban from 1977 to 1983. 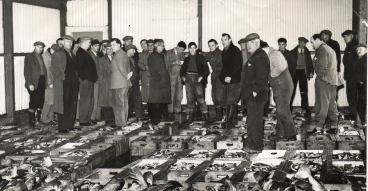 As the herring fishery declined, the whitefish sector in Wick and Scrabster continued to grow. John Duncan who first created the company operated the fish sales in both Caithness towns (Wick and Scrabster) on his own before selling his shares to JW Holdings. John S Duncan was acquired by JW Holdings in 1972 where it continues to operate in the Port of Scrabster today as the main sales agent.

In 2015, the decision was taken to merge the Wick and Scrabster offices in order to focus operations on the Port of Scrabster where the fish auctioning hall is located. 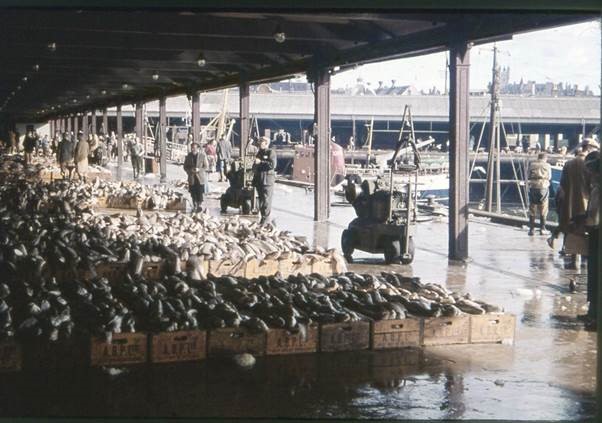 Prior to Aberdeen establishing itself as the Oil and Gas Capital of Europe, the fishing industry was the predominant sector in the city. Aberdeen flourished as a major fishing port throughout the 19th and 20th centuries with the construction of the old fish market along Commercial Quay in 1889. The port established itself as Scotland’s leading whitefish port due to its large trawling fleet and equally large processing sector.

Aberdeen harbour was home to a large fleet of whitefish vessels all diverse in nature from the 1950’s. There was middle distance trawlers which would fish up to 16 day trips up in Faroes waters, smaller classes which would fish relatively close to the North East and West Coast of Scotland. In addition to steam and diesel powered side trawlers there was the larger purpose built line boats that would fish up to 28 days in depths down to 400 fathoms targeting Halibut.

Although some local owners invested in new stern trawlers an ageing fleet started to reduce in size and from the 70’s onwards, seine net boats from the North East of Scotland and pair trawlers contributed most of the fish landed into Aberdeen.

In the late 1970’s and 1980’s, many whitefish skippers started to boycott Aberdeen in favour of Peterhead in protest at the high costs associated with labour and lumpers. The demise of Aberdeen was a direct result of a steady decrease in fish landings and consignments at the port.

The Don Fishing Co made the decision in 2007 to close the Aberdeen office and merge this with the Peterhead branch. Shortly after, Aberdeen Harbour officially closed the Aberdeen fish market, thus ending a chapter in the Don’s history. 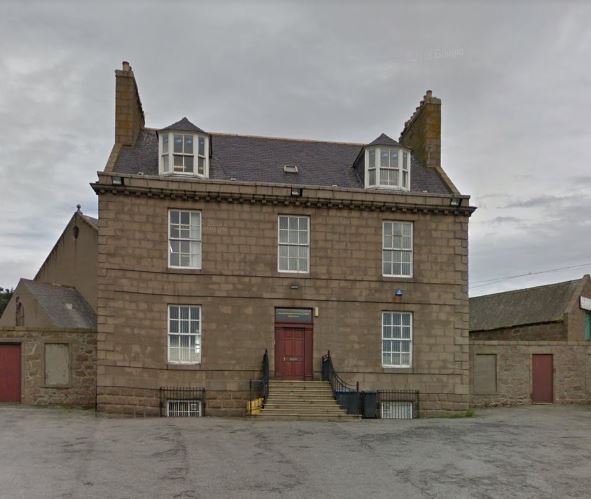 The Don Fishing Company currently reside out of Bath House in Peterhead. Bath House was built in the early 19th century and belonged to Thomas Arbuthnot Jnr. He was a merchant, with shares in a lot of ships, including whalers but died aged 36 in 1868. The house repeatedly changed ownership until 1909 when wealthy fishermen purchased the house at auction. Unfortunately the fishermen that owned the building died tragically in 1954 in a fishing accident as they were lost at sea. Bath House eventually found itself in ownership to Peterhead Bay Authority who used the building until their merger with Peterhead Harbour to form PPA. The Don have been in residence of Bath House since 2007 where it now acts as the company’s main office

By continuing to use the site, you agree to the use of cookies. You can find out more by following this link.